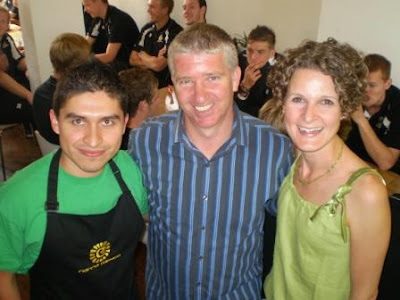 Yesterday afternoon, the whole Cambridge Utd football team, manager Martin Ling, plus a few others came along to nanna mexico to launch the ‘big ass burrito’ giveaway. They all tucked in and certainly enjoyed their food!
The idea behind this year long promotion is to make people aware of nanna mexico, the independent Mexican restaurant on Regent Street. I organised the promotion with Cambridge Utd who immediately loved the idea. What a great way to introduce people to the restaurant and bring a bit more excitement to each of the home games. Look out for the featured player in each of the home game programmes, and if that player scores a goal, take your programme down to nanna mexico and get your free big ass burrito.

I had arranged for a number of press people to cover the story. Andy Burrows of Radio Cambridgeshire interviewed a number of players and manager and quizzed Josh Coulson as to whether he could win a burrito for all the fans!

To find out more, take a look at the official Cambridge Utd website.
Will Josh Coulson score tonight and feed the fans? We’ll have to wait and see. Good luck Josh!

May day! May day! – Work experience

Social media (Views are my own) – or are they?

Views are my own This is a line...

Everyone is busy writing! Copy for a new campaign is on the menu today.

About 2 days ago from Spirus Marketing's Twitter via TweetDeck

CALLING ALL #SOUTHAFRICANS IN #CAMBRIDGE! #awareness is the first step in any marketing plan 😊🇿🇦 twitter.com/TaniaVer…

About 3 days ago from Spirus Marketing's Twitter via TweetDeck

Super busy Monday yesterday and off to see a new client today. Wishing you all a fantastic Tuesday! #TuesdayThoughts #marketingforsales pic.twitter.com/5wFJ…

May day! May day! – Work experience